Imagining Victory will tour throughout regional New South Wales and Victoria from October 2014 to March 2016. Toured by Museums and Galleries NSW. Click here for touring dates and venues.

Bell has been a leading force within the field of contemporary Australian art since the 1990s, making provocative gestures and works that often confront Australia’s arguably contentious racial relations, or as Bell describes of his objectives, as ‘an activist masquerading as an artist’. The artist frequently integrates expressions of political, cultural, social and economic disenchantment emerging out of the relationship between Aboriginal peoples and colonial migrants to Australia.

Scratch an Aussie (2008) takes form as a Freudian therapy session in which Bell opens up to a therapist, played by Gary Foley, about his perceptions of race relations. This session is interspersed with Bell assuming the role of therapist for a group of young blonde-haired Australians as he urges them to frankly discuss their concerns and attitudes about Aboriginal people. In Broken English (2009) Bell elucidates questions of Aboriginal political empowerment through questions posed within the various contexts of a chess game, a gallery opening and an Australia Day re-enactment of Captain Cook's landing.

Bell’s trilogy of films will be completed through the premiere of The Dinner Party. In this film, the artist uses Brisbane’s picturesque riverfront as a backdrop for a well-catered dinner party in a luxurious mansion. Over the course of the dinner a number of famous Australians will speak, as if privately, of their views of the interrelationship between Aboriginal and non-Aboriginal people in this country. These conversations and discussions occur within a context of privilege, both economic and social, and far-removed from the most obvious sites of Aboriginal disaffection and political, cultural, social and economic inequities.

Richard Bell (born Charleville, lives and works in Brisbane) is a member of the Kamilaroi, Kooma, Jiman and Gurang Gurang communities. The artist has held numerous solo exhibitions since 1990. Bell is currently the subject of a major exhibition Uz vs. Them that is touring the US throughout 2011-13 following his Location One International Fellowship and exhibition I Am Not Sorry at Location One in New York in 2009. Bell has participated in many major group shows and biennales including: Adelaide Biennial of Australian Art, 2012; 2009 Terra Nullius, ACC Galerie, Weimar & HALLE 14, Leipzig, Germany, 2009; Half Light, Art Gallery of New South Wales, Sydney; 16th Biennale of Sydney, 2008; and Culture Warriors, The National Indigenous Art Triennial, National Gallery of Australia, Canberra, 2007. A past member of the Campfire group, Richard is a founding member of proppaNOW, the Brisbane-based Aboriginal artists collective that also includes Tony Albert, Vernon Ah Kee and Gordon Hookey. Richard Bell is represented by Milani Gallery, Brisbane. 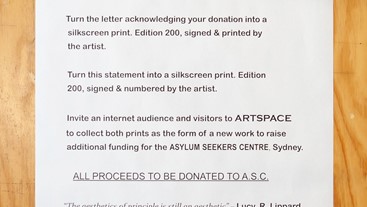