Performance functions as the absent-presence/present-absence within this group exhibition. Three broad strands of performance/artwork relationship emerge in a cacophony of object and image forms and traces, indicating something of the manner in which live action haunts so much of otherwise apparently distinct contemporary practice.

Performance functions as the absent-presence/present-absence within this group exhibition. Three broad strands of performance/artwork relationship emerge in a cacophony of object and image forms and traces, indicating something of the manner in which live action haunts so much of otherwise apparently distinct contemporary practice. In one sense the exhibition might be said to be predicated upon the remediation/deferral of performance (or action) in image form. In another way, it foregrounds the manifestation/trace/sublimation of live action presented in the form of inanimate objects. Then again, in select moments of ‘liveness’ it presents the artist at work through performance, manifesting in-situ, through time otherwise apparently contradictory impulses towards disappearance and recuperation of performance as both experience and category. Works throughout the exhibition apparently or implicitly claim a lineage in the history of performance, whether in acts of homage or simply as a strategic model. Simultaneously they demonstrate a reinvestment of the performative within object making. Various performative modes are both staged and foreclosed upon: gesture, action, ritual, exploration or journey, labour, theatre, comedy etc.

Matthew Bradley presents a workshop-like installation displaying the creation of a prop for a future performance, part of Bradley's ongoing Monster Bike project through which the artist aims to build a fully operational monstrous super motorbike that he will ride across the expanse of Lake Eyre.

Will French is represented here by modest, elusive yet evocative traces of discrete actions undertaken overseas: a formal record of split times including those of the artist cycling laps of a Japanese velodrome; traces of a fading exhortation to memory chalked on a French street; lip-sticked impressions from a writer’s grave.

The practice of Yiorgos Zafiriou is driven by performance, but here he occupies the space of the gallery very differently, through marble monochrome paintings that themselves perform as stand-ins, placeholders almost, for original Gothic and Renaissance works in the Gemäldegalerie in Berlin. The artist’s use of marble, which is subversively presented as painting, serves as a key reference to Zafiriou’s Greek heritage, weaving together the complexities of Eurocentric ideas of Hellenism and the contemporary mechanics of the Greek diaspora in Australia.

Lauren Brincat continues her ongoing video performance portrait project with a pair of recent works: one depicting the artist’s slow, meticulous removal of herself from the camera’s field of vision; the other in a homage of sorts to Joan Jonas sees the artist – on the other side of the world from ‘home’ – recording her inverted morning and evening greetings to the camera.

Paul Donald will also undertake live work daily, 11am-5pm, from the opening of the exhibition until the completion of his work. He will simply – or perhaps not so simply – attempt to build a bridge across the gallery without formal plans or advance engineering. The structure will extend piece by piece, always with the risk of collapse, of failure, with every new action. 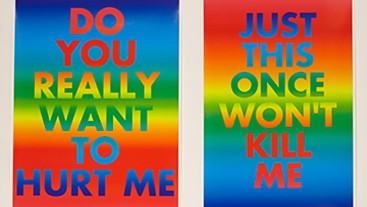 Art as a Verb 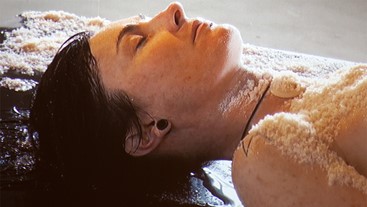 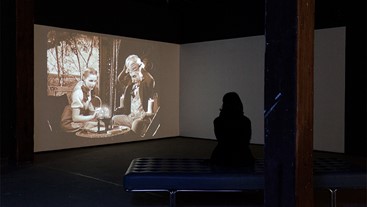