Franz Ehmann's forever young was a sculptural text food performance event with materials akin to theatre props. The materiality of the space was staged, its language the voice of bleak humour. The new message reverberated in a never-ending forever young. I am with you, for you and amongst you.

The ‘newspaper floor' event enacts itself. It is a thin layer of data skin, full of violence and destruction and is clearly to be recognised as a negative horizon. The newspaper floor is hermeneutically fixed, a continuum of interpretations and translations - a speeding and ever increasing form of word and physical violence spreading out into every living space. Speed, space, energy, strategy and event, all summed up in a linguistic territory and in a cultural approach reaching Machiavellian proportions. In the words of Voltaire: "Those who can make you believe absurdities, can make you commit atrocities."

Over six weeks one of six artists participating from Australia and abroad undertook a performance work in one of the Artspace galleries resulting in the installation ‘aftermath' and collectively creating a dynamic, rolling set of relationships between changing spaces. This program was completed by two discrete performance works by local artists. The project was also accompanied by a set of screenings of international performance documentation in the Artspace Reading Room and a Symposium held at CarriageWorks on Saturday 18 August, 2007. 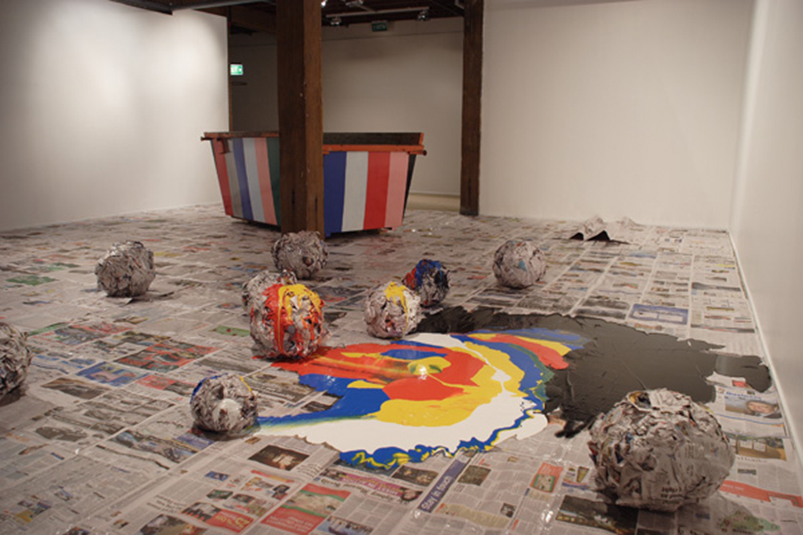