Joyce Hinterding and David Haines have collaborated again to produce a technologically generated installation Purple Rain, a work that intervenes directly into the very subject and process of transmission itself.

Without doubt it is a political space, particularly when considered in the wake of 9/11, and the recent events in Iraq, Israel, Spain and Bali, where a mobile phone can spark a terrorist bomb, instilling mass clinical fear. The radio signal can change the state of matter in an instant just as global opinion is transformed when the media saturate us with their signal.

Electronic frequency transcends without discrimination, without distinction, transmitting domestic pleasure equally with military tyranny, as waves flow effortlessly in all directions simultaneously in an abstract electronic architecture that is a schizophrenic exercise of power. It is this apparent invisible environment that Joyce Hinterding and David Haines have collaborated again to produce a technologically generated installation Purple Rain, a work that intervenes directly into the very subject and process of transmission itself.

By utilising a sculptural array of antennas and receivers, they have invaded the intense electronic environment of Sao Paulo, like maverick raiders to "steal" the energy from the broadcast spectrum in order to construct their own broadcast of an illusionary event, a false unofficial video image of a natural disaster, where a "real" mountain will explode, subject to the actual fluctuations of the electronic environment. In doing so, they redirect and redistribute the flow of information, by rewriting, manipulating and mutating the transmission in a deliberate act of resistance to the seamless authority of the information transmission.

Their televisual interference works to both de-conceal the inaudible signal itself in order to function as the artists material, as well as to reveal a politically subversive destabilisation of the security and confidence that surrounds the prevailing markets of the information and media industries, much like a postmodern station break in the broadcast environment. Their eavesdropping, their scanning, their secret listening, is a critical interrogation and renegotiation of the structure of power that controls the transmission, as they turn their own surveillance systems against the networks themselves.

But in this instance, they seem less concerned with undermining the empirical logic of the information and data energy that they "steal", as with the realisation of the data into a different broadcast from within their own pirate ship / laboratory, a dissonant broadcast of synthesised sound and image that bears no resemblance to the original, whilst challenging the virtues of modernity and its legitimating claims in relation to the questions of legality, permission, authorisation and ownership. 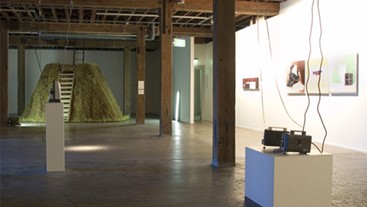 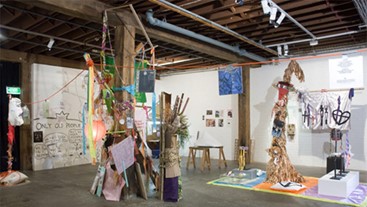