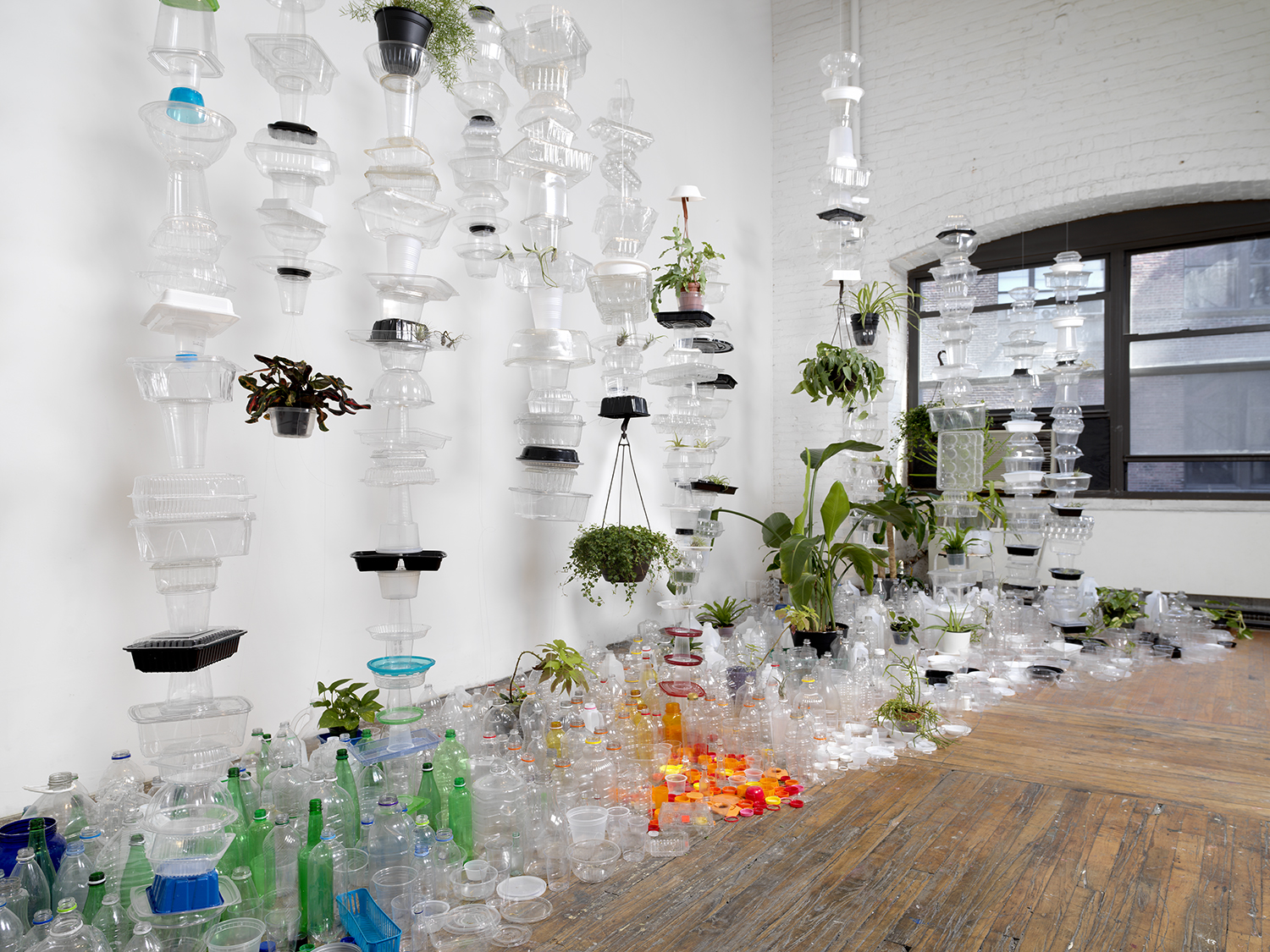 Plastic Topographies is a hybrid dreamscape comprised of accumulated post-consumer plastic packaging collected from the Artspace building and surrounding environment.

Stacked containers climb towards the ceiling like mutant forms, overwhelming the gallery, to create a topographical composition. Drawing from environmental concerns and a critique of human consumption, this work transforms recognisable objects into a landscape of synthesis and evolution.

Plants sprout forth from recycled containers suggesting renewal. The foliage purifies and cleanses the air of toxins creating a verdant healing and recuperative environment. In this paradoxical landscape, plants create the oxygen we breathe whilst growing from plastic objects that suffocate the natural world. The containers are precariously assembled yet playful like a house of cards or a game of Jenga, their architecture is colourful and buoyant, recalling makeshift provisional structures. The work ambiguously holds both utopian and dystopian qualities.

The work recalls residual urban spaces and parklands strewn with plastic waste and vast islands of floating debris found in the Pacific Ocean. These break down into microscopic particles, which are then consumed by fish and animals entering the food chain. For Berkowitz, working within a paradigm of sustainability, the process of collecting waste material, washing, cleaning, transforming and regenerating is an important part of her practice.

Plastic Topographies is a reinterpretation of a work created during a residency at the International Studio and Curatorial program in New York City earlier this year.


Lauren Berkowitz is a Melbourne based artist who has a twenty-eight year history of exhibiting work in public art museums and commercial galleries within Australia and overseas. Her work has been included in many important group exhibitions including Melbourne Now, National Gallery of Victoria, (2013-2014); In The Balance: Art For A Changing World, The Museum of Contemporary Art, Sydney and the Achi Triennial, Nagoya, Japan, (2010).

Berkowitz participated in Soft Sculpture, Australian National Gallery, Canberra (2009); Echigo-Tsumari Art Triennial, Japan, (2003), and Perspecta: Between Art and Nature, Art Gallery of New South Wales (1997). Her work is documented in the books Sculpture Today (Phaidon, 2007, London), Art and Ecology Now (Thames and Hudson, London, 2014) and a monograph by Charles Merewether titled Lauren Berkowitz (Craftsman Press, 2001, Australia). Berkowitz has had solo exhibitions at Rosyln Oxley9 and Sherman Galleries, the Museum of Modern Art at Heide, and the Jewish Museum of Australia.