In a Station of the Metro

Shaun Gladwell is one of Australia's most prominent younger artists, working extensively internationally in the medium of video.

Shaun Gladwell is one of Australia's most prominent younger artists, working extensively internationally in the medium of video. Featuring a number of major works never before shown in Australia, installed across all of the Artspace galleries, this exhibition was the largest solo presentation to that point of Gladwell's video work.

Gladwell's practice critically engages personal experience as well as wider speculation upon art history and the dynamics of contemporary culture. This range of interest and sources is explored through a variety of mediums, but in recent years most particularly video installation. His recent projects in video have made discursive links between historical models and understanding of the body in space such as the flâneur and contemporary cultural figures such as the skateboarder, the motocross rider, the freestyle BMX rider, break-dance crews, a capoeira practitioner and other physical and street performers. The work generally deals with performative figures in space, disrupting the social and architectural programming of urban spaces in particular. As this ongoing investigation of spatial articulation has deepened and gathered momentum it has begun to more closely inform and be reflected in the installation structures of the work itself, with an increased experimentation with multi-channel formats and architectural features as projection surfaces.

Gladwell's work also experiments with certain traditional or established representational genres and concepts. For example, the genre of the romantic landscape and its association with traditional concepts such as the sublime is handed over to - or co-opted by - contemporary practices such as skateboarding or break dancing. However, his practice does not attempt to either simply update or recuperate traditional models. On the contrary, the traditional model and current cultural practice cross-infect each other. In the process, nor is the continued use of ‘street' or ‘subcultural' activity directly claimed within the category of ‘art'. Rather, the popular projections of such cultural activity are both destabilized and transformed. The fast and furious MTV jump-cut editing of these popular representations are resisted through the use of slow motion and ambient soundscapes. The results are poetic, hypnotic and meditative representations that open the represented activities themselves to a wide range of readings not immediately associated with either their sources or my apparent subject matter.

The exhibition was accompanied by a book documenting almost 30 works in video and featuring essays by Iain Borden (Professor of Architecture and Urban Culture at the Bartlett Institute, University College, London), Carolyn Christov-Bakargiev (Artistic Director, 2008 Biennale of Sydney) and Blair French, along with an interview with the artist by independent curator and writer Ihor Holubizky.

Versions of the exhibition toured in NSW, Queensland and South Australia through 2008 and 2009. In association with Museums and Galleries NSW 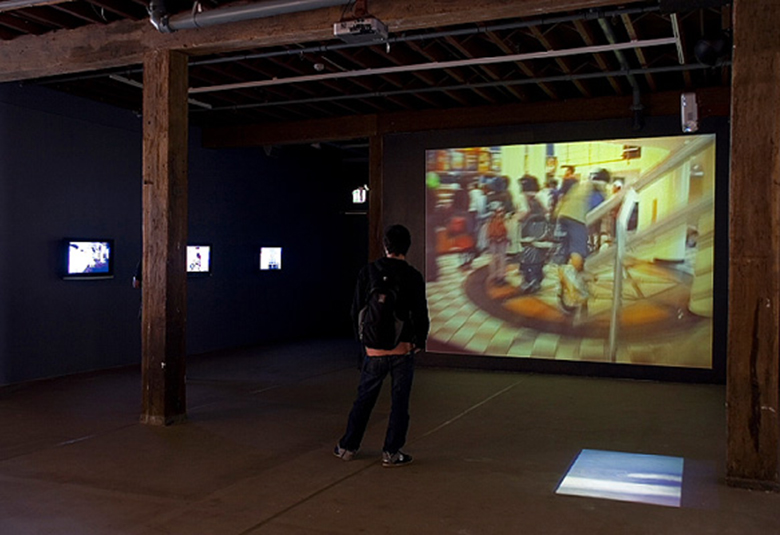 Shaun Gladwell, 'In a Station of the Metro', installation view, Artspace, Sydney, 2007