After a milestone year, we're excited to announce our 2016 Program.

In 2015 Artspace supported an unprecedented number of artists and audiences through an expanded and interrelated program of exhibitions, projects, studios, residencies and public programs — in September alone we launched VOLUME 2015 | Another Art Book Fair, the largest art book fair in Australia; the first monograph of Australian artist Justene Williams; and a new website developed in partnership with Atlas Agency.

After a milestone year, we're excited to announce our 2016 Program, in which we continue to support risk and experimentation through diverse exhibitions, Ideas Platform projects and touring programs, augmented by innovative online initiatives and a lively series of pubic programs and events.

Free studios are just one of the ways that Artspace supports living artists, and these seven practitioners will engage with their spaces in a variety of ways leading towards national and international exhibitions and projects, including major new commissions for The 20th Biennale of Sydney and The Art Gallery of NSW.

Artspace thanks and farewells our inaugural One Year Studio Artists — Khadim Ali, Hany Armanious, Kelly Doley, Nick Dorey, Mikala Dwyer, Clare Milledge and Tim  — whose energy and generosity continue to enrich our program and our community.

2016 will open with Dämmerschlaf, a group exhibition featuring new, site-specific work commissioned from three of the inaugural Artspace One Year Studios Artists. Translated into English as ‘twilight sleep’, the term describes the state induced by a combination of analgesia (pain relief) and amnesia developed in Germany in the early twentieth century to combat pain — or the memory of pain.

Dämmerschlaf looks to the invisible forces that motivate, guide, connect and entangle us with one another, engaging ideas around the supernatural, the occult, alternate spiritualities and different ways of perceiving reality. Collaboratively weaving together an immersive and embodied realm, the artists will also install and alternately inhabit a mis en scène of studio refuse and detritus, transforming the exhibition space into a live site for composting ideas, transforming matter and unearthing imaginative forms from the subterranean foundations of The Gunnery.

Artspace will host a number of public programs during the course of this exhibition, including artist talks with local sustainability collective GreenUps, as well as a screening of the film Containment — part-graphic novel, part speculative documentary and part art observational essay filmed in weapons plants, Fukushima and deep underground that seeks out a universal language of warning systems in a future nuclear half-life. 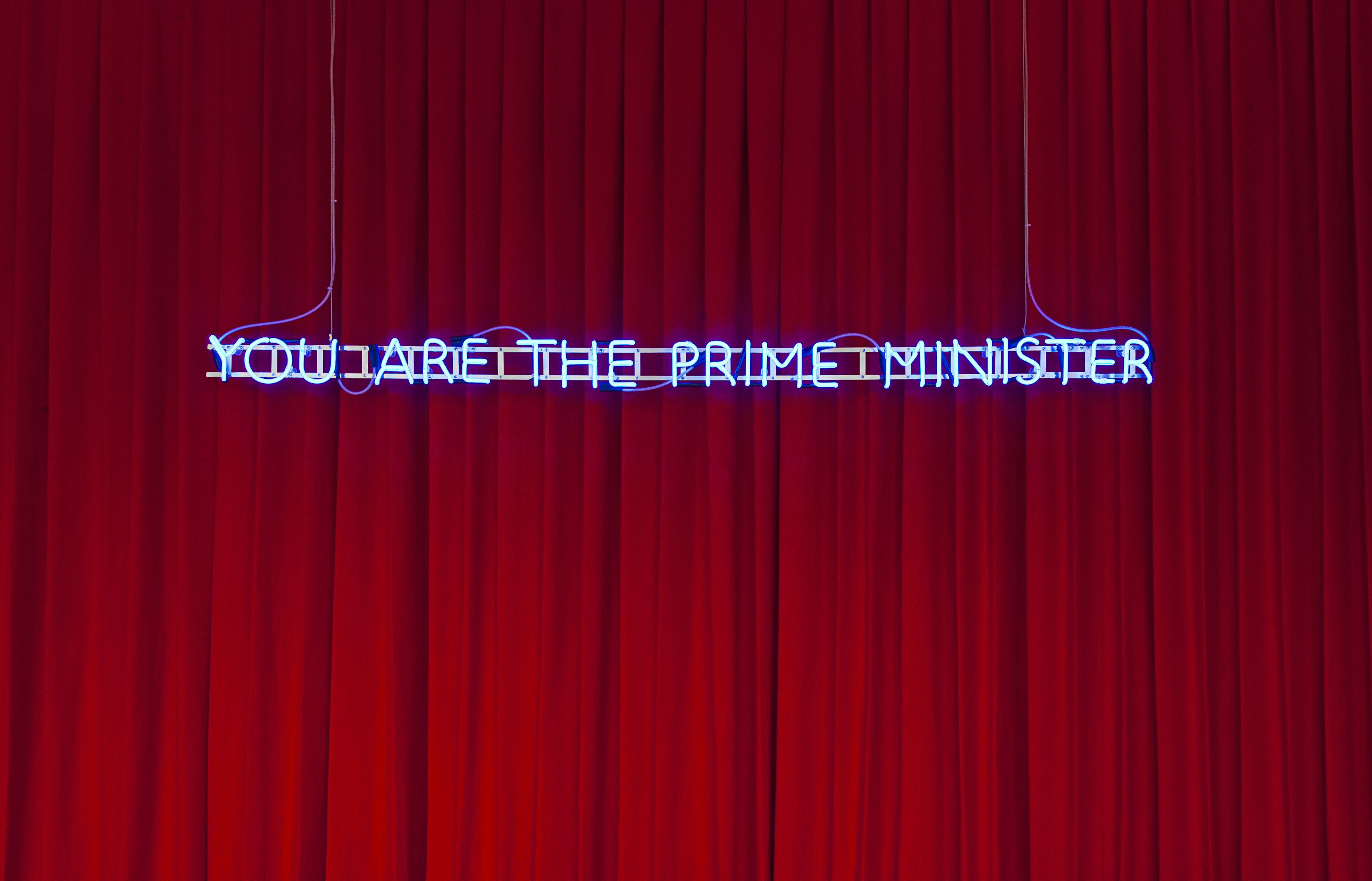 In March The 20th Biennale of Sydney, The future is already here — it’s just not evenly distributed, curated by Stephanie Rosenthal, will launch at Artspace with the Embassy of Non-Participation (one of seven 'Embassies of Thought' thematically unifiying the #20BOS venues), a presentation of the work of UK-based collaborative artist duo Karen Mirza and Brad Butler (Mirza/Butler). The Embassy of Non-Participation is anchored on their long-running project The Museum of Non Participation, which investigates neoliberal life through an imaginary and mobile institution that invites its visitors to question the possibilities of active withdrawal.

Alongside the embassy a series of workshops and public programs will be presented by participants of The Bureau of Writing, a writing program designed for artists and collaboratively produced by Artspace and The Biennale of Sydney.

Featuring works created between 1999 and 2015, The Full Cut will be the first institutional survey of the full suite of cinematic montages by artist Tracey Moffatt and editor Gary Hillberg. Developed in partnership with UNSW | Art & Design media labs and the iGLAM+ Alliance, Montages: The Full Cut is a filmic exploration of popular culture and Hollywood imagery that populates our collective imagination. Active since the late 1980s, Hillberg is well known as an experimental filmmaker and music video producer, and Moffatt is widely regarded as one of Australia’s most important artists, having recently been selected to represent Australia at the 57th Venice Biennale. 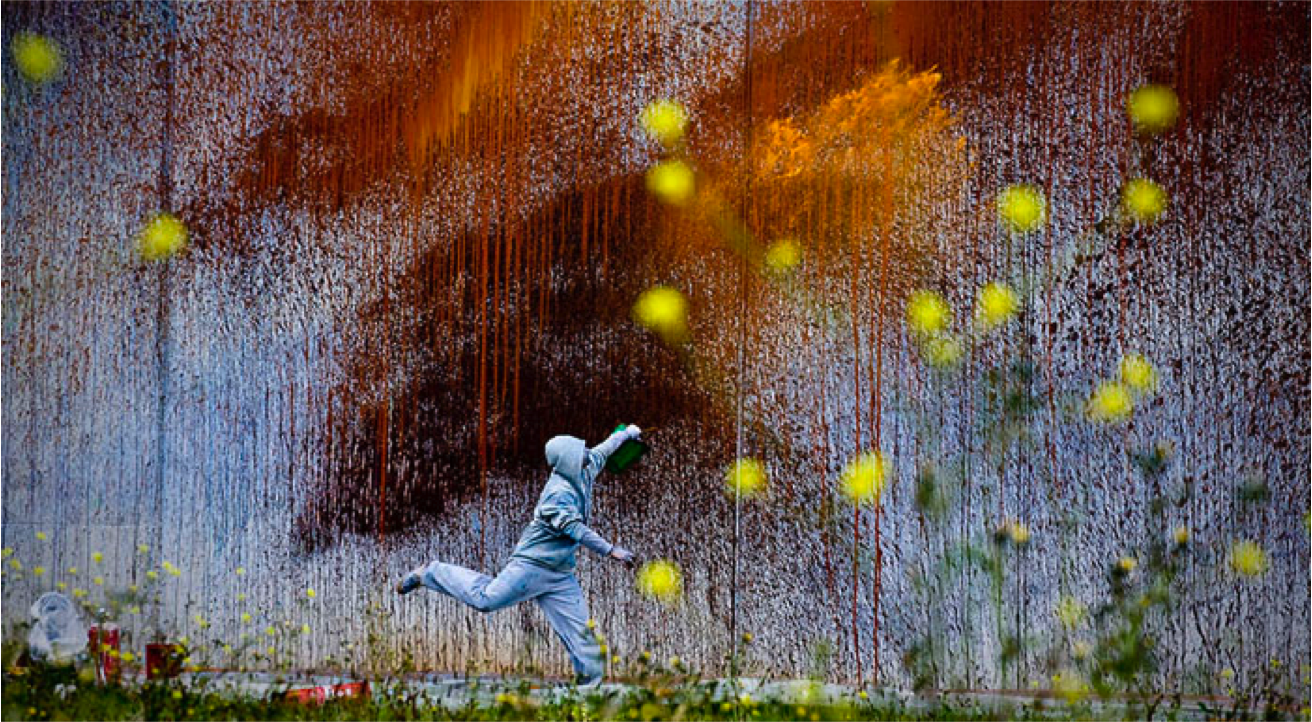 As a ‘bricks and mortar’ institution it is centrally important that Artspace supports dialogue with the online realm and developments around the exhibition and display of works online. We strengthen our commitment to technological innovation with the launch of 52 ARTISTS 52 ACTIONS, a site-specific and online durational exhibition and initiative designed to engage a diverse group of fifty-two artists and collectives from across Australia and the Asia-Pacific in weekly performative actions and social engagements over the duration of a year. At the core of 52 ARTISTS 52 ACTIONS is the concept of rethinking recent strategies around digital curation and relational practices.

We also continue to develop Open Source, a digital publishing platform and research tool hosted on our new website and developed in partnership with Atlas Agency, where audiences can freely access over 600 articles of critical writing, produced by over 300 contributors over 25 years of Artspace’s publishing history, and a site for artists and writers to curate, create and produce new web-based content. 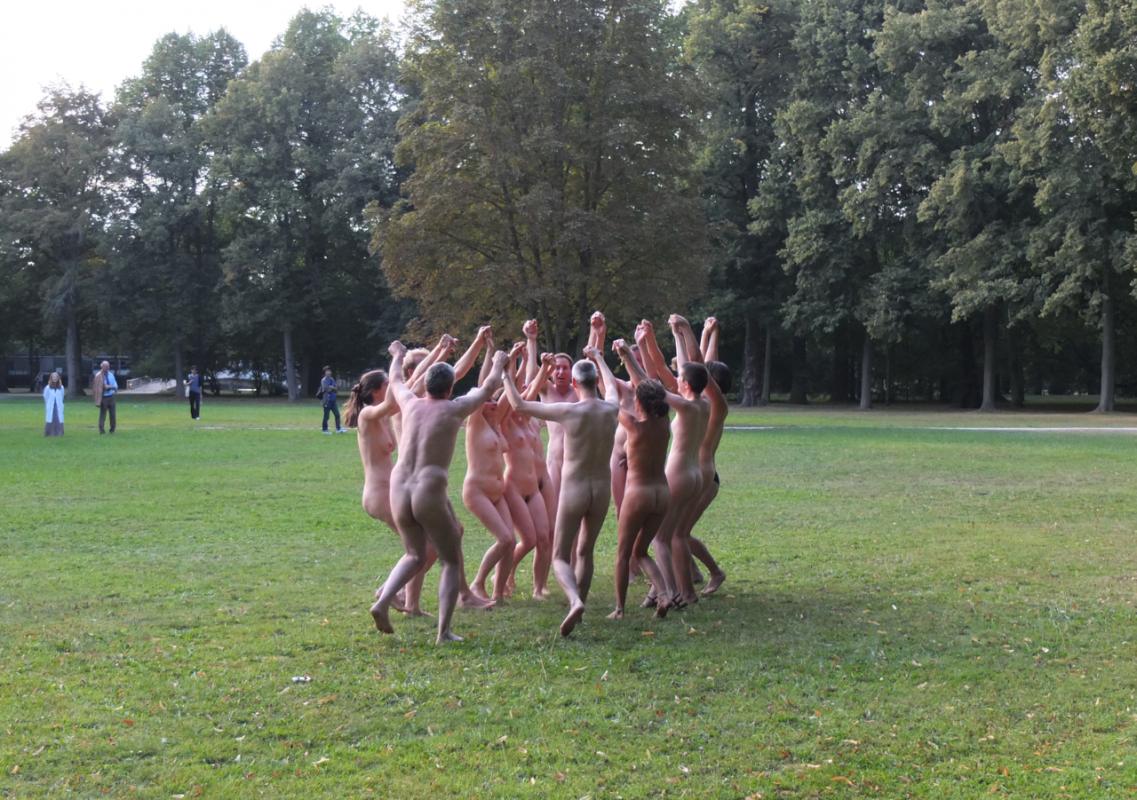 The penultimate presentation of 2016 is The Public Body, a group exhibition of Australian and international artists that collapses and conflates public and private spheres through the contested space of the body. Specifically, the exhibition explores ‘extimacy’, a term coined by Jacques Lacan in the 1960s to define the intimate relationship between the analyst and patient, and its relationship to post-feminist, queer and trans discourse, as well as a way of characterising the extrovert ways we unveil our intimate selves through social networks and media. 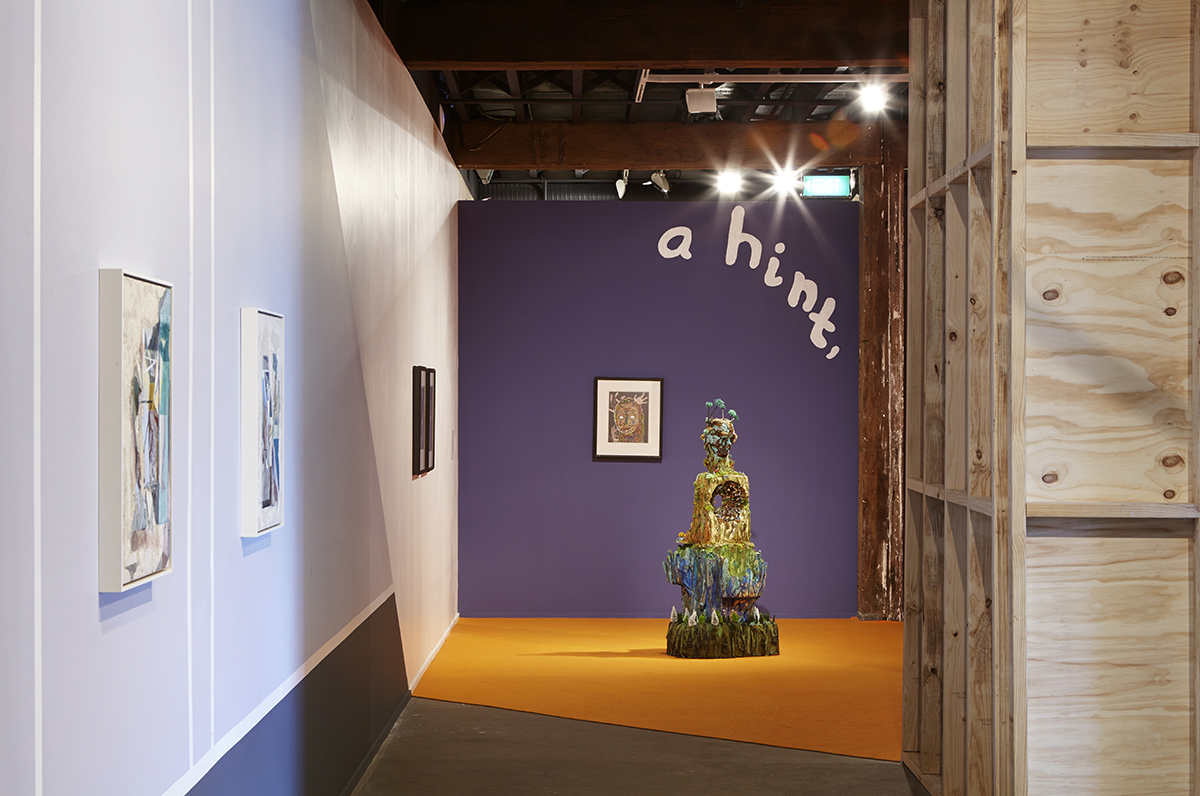 The exhibition program will conclude as it does each year with the expansive NSW Visual Arts Fellowship, presented by the NSW Government, through Arts NSW, in partnership with Artspace. Featuring the work of twelve emerging artists selected from across the state, the Fellowship is a vital opportunity for professional development and curatorial mentorship, as well as Artspace’s key exhibition for profiling the dynamism and breadth of emerging contemporary artistic practice in NSW. Our new partnership with Parramatta Artists Studios will also culminate in an exhibition featuring six new artists working from this Western Sydney hub, presented in the Ideas Platform and opening alongside the Fellowship. 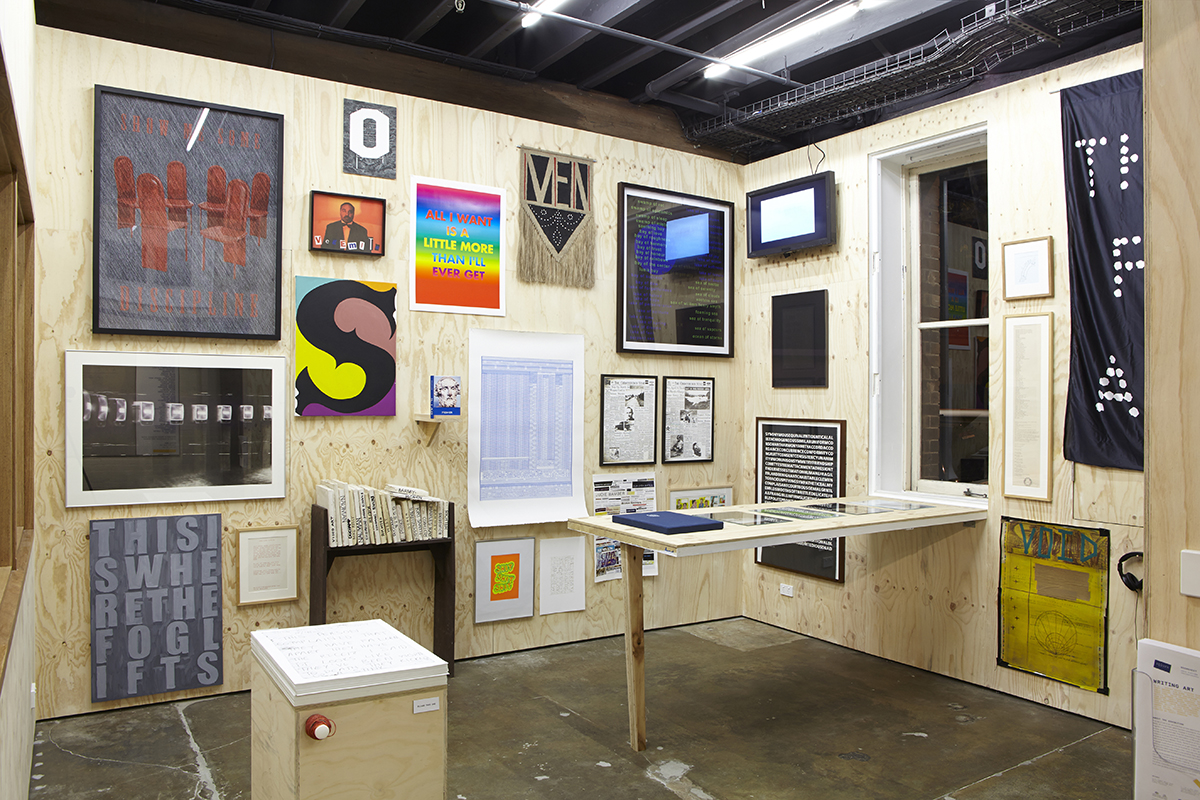 With the support of Andrew Cameron AM and Cathy Cameron, the Ideas Platform continues to activate the Artspace entrance with a program of projects from artists working both locally and abroad, commencing with a solo presentation by 2015 Artspace One Year Studio Artist Tim Silver. Additional presentations including projects by experimental noise and voice installation artist Kusum Normoyle, Berlin-based Australian artist Gerry Bibby, and Brooklyn-based Katherine Bernhardt supported by Danny and Lisa Goldberg.

In 2016 Artspace will also co-produce and present a series of public talks, programs and events, including a two-day symposium with the Print Council of Australia in celebration of their 50th anniversary as well as the the launch of Terry Smith: Thinking Contemporary Curating with Independent Curators International (ICI) New York.

We look forward to seeing you in 2016 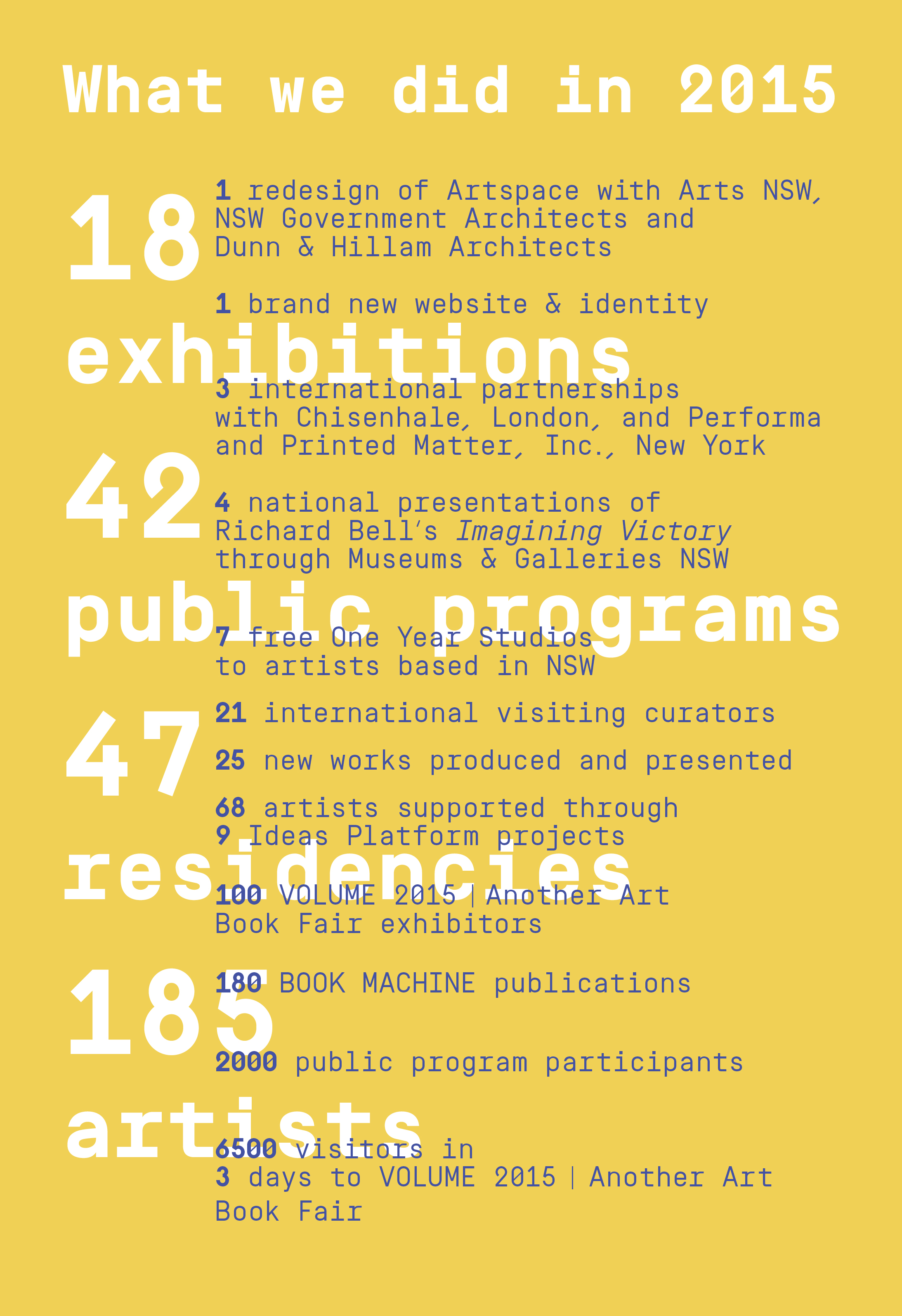